There are 2 major traditional Mongolian holidays. One of them is the summer sports festival called Naadam. The other is the Lunar New Year, known in Mongolia as Tsagaan Sar or White Moon/Month.

In order to prepare for the festivities, families mob the grocery stores, clean house, make (sometimes literally) thousands of buuz (steamed meat dumplings), and buy new deels (or get their finest ones ready). The mobbed store I got to experience for myself, as I was sick the second weekend before Tsagaan Sar and couldn’t get my shopping done then. Almost all the stores are pretty small and if the space itself isn’t, the space left from shelving and stacked merchandise is. It was like grocery shopping the weekend or day before Thanksgiving. Outdoors, it was still well below freezing, but as I was standing in line, I could feel the sweat soaking into my thermals, shirt, fleece, and jacket.

Passing a (practice) snuff bottle back to a young boy.

The night before the event, Lunar New Year’s Eve if you will, the close family members spend time together and may visit their closest relatives, usually the head of the family or the brothers and sisters of the parents. The next day begins three days of drinking, eating, giving and receiving presents, small children coming around to collect money and candy, house hopping, and trying to recover enough to do it all again the next day.

Two of the many children who visited my house. 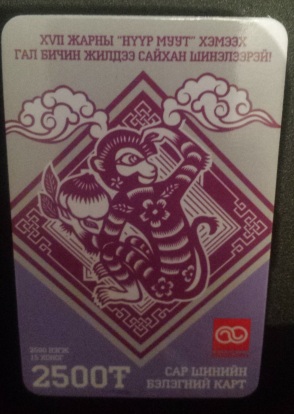 One of the presents I got for visiting houses, a card with credits to add to my phone.

Tuesday went well, I visited two or three homes and had more than my fill of buuz, mayonnaise-based salad, mutton, airag (fermented horse milk), and candy. Wednesday started out well, but did not end that way. I ate and drank far too much to get away with anything less. At the second house (of three) I lost count of how much I had consumed and by the time I got home, I was doomed to a night of discomfort. Thursday I recovered enough to go to one house, but was very careful about how much I ate and drank.

Yin and I with the family of some of our teachers. The cookie tower’s height depends on the generation of the family hosting.

Also, the Agaa Egee (Big Brothers/Big Sisters-style mentorship club) at my school had a subdued version of Tsagaan Sar the Tuesday after the actual holiday. We steamed up some buuz, built our cookie tower, played shagai (games using sheep or goat ankle bones) and did some other fun activities.

Round 1 of school buuz (and one little bansh) ready for steaming.

Overall I’d say this Tsagaan Sar was a success. And I have learned a lot for next year. More houses and less consumption is the game plan. Hopefully I’ll have plenty of invites!

I’ll be writing about my other February and March adventures this week while I have most of my days free during the 3rd quarter break. There’s eagles, International Women’s Day, and you’ll get to meet my new roommate!