Thanksgiving and “Mongolia’s Kidz Got Singing”

Thanksgiving happened a little early this year, but I had a great time. On Friday, the 20th of November, my sitemate Jessica and I got to the bus station a little later than we had planned. We weren’t sure if the bus to Mandalgobi had left already, but we figured it was leaving soon. We stood in the below-zero weather for a few minutes before Jess decided to head inside. I wasn’t cold and I figured I might as well get some standing time in, since we’d be sitting for the next 5 or 6 hours, so I stayed outside. After another 20 minutes, she came out and said the vehicle had apparently not gotten to the station yet and the wait might be a little while longer. I went in and sat next to a package that said it was heading for Dundgobi, which Jessica pointed out meant that we definitely hadn’t missed the bus and whenever that package left, we should too. Made sense to me. Though, I did go over to the window at one point and asked about the bus. The only word that I knew for sure was “mashin” which means vehicle, but I felt, more than translated, that the bus had had a mechanical problem and they were sending a different bus. It turned out to be a mikr, but it was, thankfully, plenty of room for the two Americans and nine Mongolians that started the bumpy ride to Dundgobi.

One of several Thanksgiving posters made by my students.

We made several stops in soums on the way to the aimag center. Some people got off, others got on. I got to see camels for the first time! We got offered some cold meat from a bag and I ate it, though Jessica declined because she’s had enough mutton to last a lifetime. I’m not sure what kind of meat it was, but it was cooked with onions and actually pretty delicious. Jess had brought some chips with her, which she shared with an adorable little Mongolian boy. The ride got super bumpy at one point, which caused an argument between the driver and a mother who was holding a six-month-old in her arms. It went back and forth for a while, but didn’t get too heated.

When we got to Mandalgobi, the mikr driver asked us where we wanted to be dropped off. Since our host, Elijah’s apartment is close to his school, we asked to be dropped there. We met up with him and dragged our stuff a few hundred meters to his place. That night, we ate at a guanz, which is a place with a diner-like atmosphere that serves Mongolian food. I had some mantuu (steamed bread) and a couple buuz (steamed dumplings). Some of Elijah’s sitemates came over that night and we played Bananagrams.

Thanksgiving Day was the 21st and it was amazing. We didn’t have a turkey, but we did have turkey cakes, which are made with stuffing and canned turkey and taste divine. We had chicken, mashed potatoes, bread, mac’n’cheese, pie, cookies, and a lot of other food.

When I got back from Thanksgiving, all my students and teachers were busy preparing for a school talent competition. I think every student participated. Classes were basically put on hold for two weeks for preparation. There was singing, dancing, recitation, and acting. 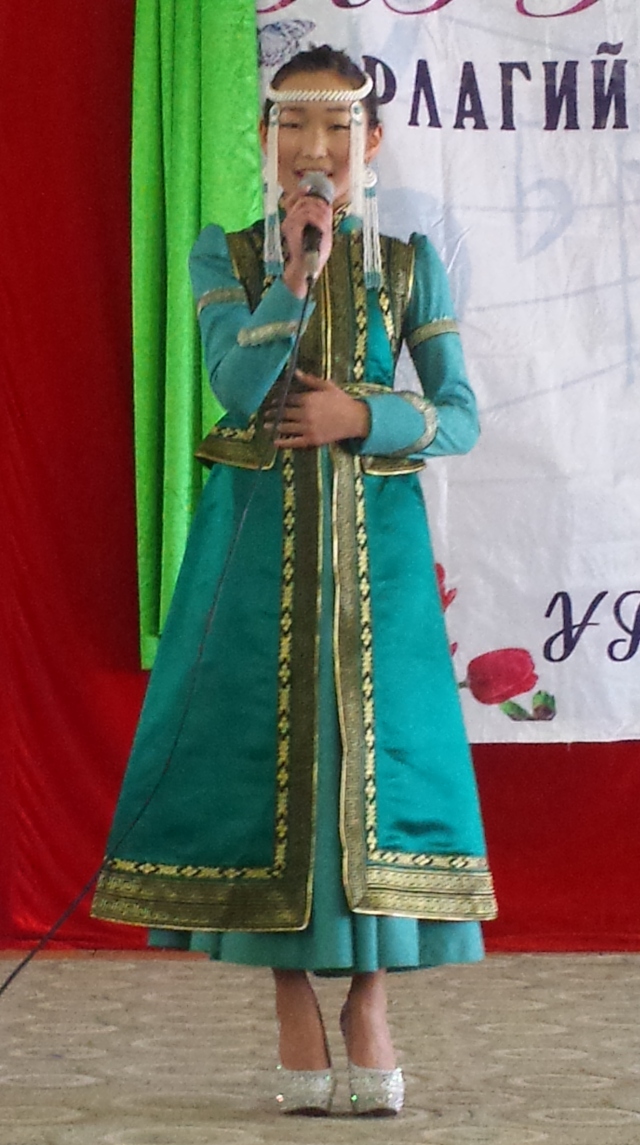 One of my talented students.

The youngest, starting with 1st grade, were adorable. The older students did a pretty good job with most of their performances, though I wasn’t able to watch all of them. (There’s only so many hours at a time I can sit in a hard wooden chair.) My supervisor, who is the upper school training manager, and the school’s social worker were some of the judges.

It was an enjoyable spectacle, like most events I’ve seen in Mongolia. I can’t wait to see more.

This entry was posted in Peace Corps and tagged Dundgobi, During Service, Mongolia, New Places, Peace Corps. Bookmark the permalink.